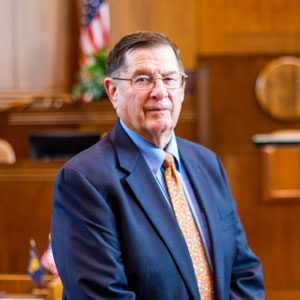 Anthony “Tony” Meeker’s family made their life in the small agricultural community of Amity in the Willamette Valley. His work around the family home and at the grain elevator taught him valuable life skills.

Attending college at Willamette University cemented his interest in politics. After running campaigns for other candidates he successfully ran for and won election to the Oregon Legislature; first in the House of Representatives in 1969, and then as a senator in District 15 in 1972. Meeker loved the legislative process. He speaks eloquently about the unique features guiding that process embedded in Oregon’s Constitution.

As a senator from Yamhill County, Meeker witnessed the birth of Oregon’s wine industry and strategic legislation that facilitated its growth into an important economic engine in the state. In 1987, Meeker accepted Gov. Goldschmidt’s appointment to serve as state treasurer. Meeker describes the role as “not a whole lot of pizzazz…but crucial to the state’s financial well being.”

During his interview Meeker makes it abundantly clear that he is an enthusiastic supporter of government and politics as important elements in Oregonian’s lives: “If we are going to self govern then you need people who are going to take on the responsibility to represent you.” He also makes clear that we all need to participate in the government process, “whether by voting or running for office.”