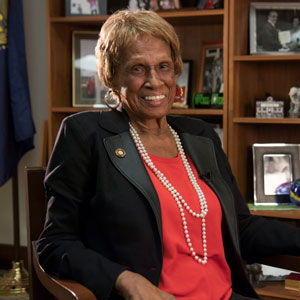 Growing up Jackie Winters listened to her father discuss the importance of politics and voting. She took those early lessons to heart. The youngest of six children, Winters was born in Topeka, Kansas. Her family moved to Vanport, Oregon for work in the Kaiser Shipyards during World War II.

Jackie Winters first came to Salem when Gov. McCall recruited her to work in the Economic Opportunity Office. From there she moved to the Children’s Services Division.

Gov. Atiyeh tapped Winters to work as his ombudsman. During this time she helped create Oregon Food Share, a program that continues presently.

Switching gears, Winters opened a barbecue business, Jackie’s Ribs, in 1985 as a place to “come in and eat ribs and talk politics.”

In 1998, voters in House District 31 elected Jackie to represent them in the Oregon Legislative Assembly. Her constituents elected her to Senate District 10 in 2002 and re-elected her for that seat in November 2018.

Winters notes the surprise she encounters when people across the country learn she is a Republican elected in a very white district and state. Winters counters that it does not “take a Black person to elect another Black person…my community looked at who I am, looked at what I bring, and elected me.”